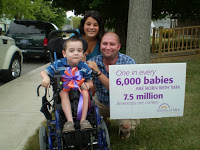 August is Spinal Muscular Atrophy (SMA) Awareness Month. SMA is a genetic disease that attacks nerve cells, called motor neurons, in your spinal cord. These neurons communicate with your voluntary muscles – the ones you can control, like in your arms and legs. As you lose the neurons, your muscles weaken. This can affect walking, crawling, breathing, swallowing, and head and neck control.

The type of SMA (I, II, or III) is determined by the age of onset and the severity of symptoms. Type I (also known as Werdnig-Hoffman disease, or infantile-onset SMA) is evident at birth or within the first few months. Symptoms include floppy limbs and trunk, feeble movements of the arms and legs, swallowing and feeding difficulties, and impaired breathing.

Type II (the intermediate form) usually begins between 6 and 18 months of age. Legs tend to be more impaired than arms. Children with Type II may be able to sit and some may be able to stand or walk with help.

Symptoms of Type III (also called Kugelberg-Welander disease) appear between 2 and 17 years of age and include difficulty running, climbing steps, or rising from a chair. The lower extremities are most often affected. Complications include Scoliosis and chronic shortening of muscles or tendons around joints.

Treatment consists of managing the symptoms. Life expectancy depends on the type you have and how it affects your breathing. While medicines and physical therapy help treat symptoms, there is no cure.

Dr. Fayaz and everyone at The Brain and Spine Institute of North Houston is proud to support Spinal Muscular Atrophy Awareness month. Please don’t hesitate to call our office if you have any questions.