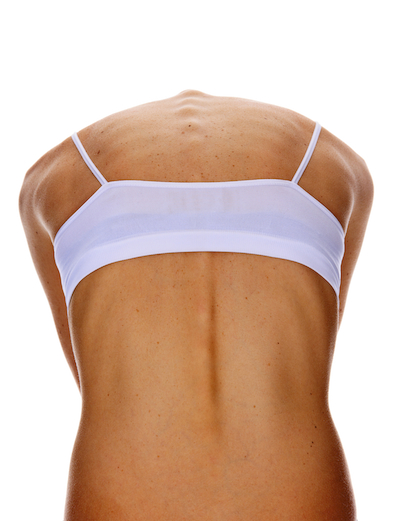 In most U.S. schools, students receive three routine medical screening tests: vision, hearing, and scoliosis. The first two need no explanation, but many people aren’t familiar with scoliosis, or abnormal spinal curvature. Schools screen for scoliosis because the disease typically manifests in kids between the ages of 9 and 15.

When a person with a healthy spine bends from the waist, the spine appears straight when viewed head on. When a person with scoliosis bends from the waist, the spine curves and takes on a slight “S” or “C” shape. Girls are more than twice more likely to develop scoliosis than boys, and most cases are described as “idiopathic,” meaning there’s no known cause. In the 20% or so of cases where doctors can pinpoint a cause, they attribute the disorder to:

When determining how to treat scoliosis, a doctor considers a patient’s age, severity of the curvature, and likelihood it will worsen if left untreated. The three main treatment approaches are: observation, using a back brace, and corrective surgery.

Scoliosis patients between ages 3 and 10 whose curvature has no identifiable cause are at high risk for their scoliosis to worsen, because their spines are still growing. In these patients, doctors typically prescribe a back brace to stop the curve from worsening, although braces don’t reverse the existing curve. Once the patient stops growing, the doctor will measure the curve. If it is less than 40 degrees, it’s not likely to worsen further and surgery may not be necessary. Scoliosis of this magnitude doesn’t cause pain and isn’t likely to lead to additional medical problems. It does affect a person’s appearance, though, and some patients opt for surgery to remove the curve.

A curve of more than 40 degrees will likely continue to worsen slowly over time. Left untreated, it could lead to serious medical problems. In these more serious cases, surgery typically is recommended to correct the curve and prevent it from returning. Patients whose scoliosis can be linked to a neuromuscular disorder affecting the spinal bones also are at high risk that their curve will worsen and usually need surgery.

Using screws, rods, and hooks, surgeons are able to correct a spinal curve significantly (by about 50%) and fuse the bones together to keep it in place. Patients suffering from extreme scoliosis who don’t undergo surgery risk eventual deformity and health complications.