The human spine is naturally balanced for optimal flexibility and support of the body’s weight.

Imbalances of the Spine: Sagittal and Scoliosis

Any spinal deformities or abnormal curvature in the spine can be seen from the side and prevent a person from standing upright, it is called sagittal imbalance. Those conditions include:

Abnormal curvature of the spine seen from the back is called scoliosis.

Each of these conditions can have various causes including deformity at birth (congenital), degeneration over time due to age, diseases such as tumors or infections or causes that are not understood (idiopathic).

This condition is an abnormal curvature of the spine. It most often develops in early childhood, just before a child reaches puberty.

What Are the
Causes & Forms of Scoliosis? 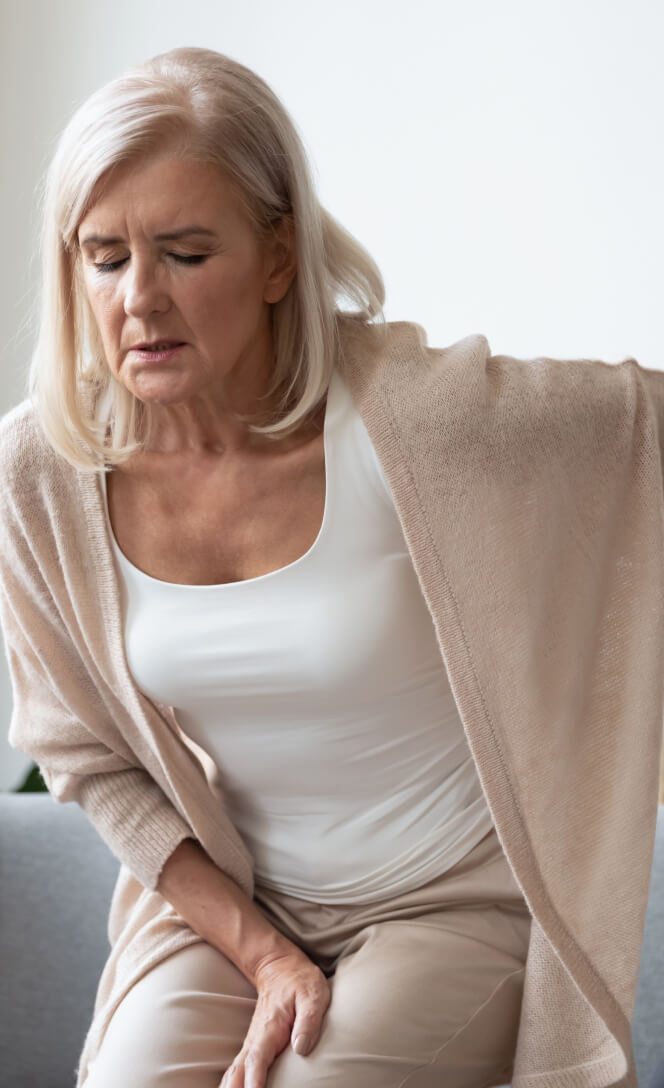 Scoliosis affects about 3-4 percent of the population and can impact the lives of both adolescents and adults, but it can occur at any time of life. The pain resulting from scoliosis comes in the form of sciatica and back pain and sometimes there is no obvious cause.

There are three main forms of scoliosis:

What Are the Symptoms Associated With
Scoliosis or Sagittal Imbalance?

Visual and tactical cues are the best indicator of any spinal deformity including scoliosis. The signs can be seen or felt by someone other than the patient. Some clues include:

Physical symptoms felt by the patient with the condition include pain ranging from mild to severe, fatigue and muscle cramping. The stretching or compression of the spinal cord or nerves produces symptoms that may include pain, weakness, numbness, or tingling that travel down an arm or a leg. They may also have difficulty standing and sitting.

How Is Scoliosis Diagnosed?

Since the spine is easy to access, scoliosis can be diagnosed very easily. A spine or neurosurgeon like Dr. Fayaz or even your primary care physician may ask you to bend and twist in certain directions to accurately determine any limitations of motion. If any lateral curvature of the spine is noticed, scoliosis treatment can begin quickly to reverse or treat the condition and prevent any deterioration. X-rays or MRIs may also be ordered to accurately show where the curvature is originating and to establish the extent of spinal deformity. A CT scan may also be used as a diagnostic imaging procedure in combination with X-rays and computer technology to produce detailed images of bones and soft tissues.

When Should I Consider Surgery?

Typically, non-surgical treatments such as pain medications, physical therapy and braces are typically recommended before surgery is considered to treat most spinal deformities and scoliosis. However, surgery may be considered under the following circumstances:

If the deformity has resulted in compression of the spinal cord or spinal nerves, the surgeon may perform a decompression surgery. A laminectomy is one common type of decompression surgery. In this procedure, the surgeon removes a section of bone called the lamina at the back of the vertebra. Removing the lamina provides extra space for the spinal cord and allows it to function properly.
Dr. Fayaz’s experience and knowledge allows him to determine the best way to align and stabilize the spine to achieve the most stability along with the goal of relieving symptoms. If you are in the North Houston, Conroe, The Woodlands, Spring area and believe you need to see a spine specialist for sciatica or lumbar radiculopathy, call our office at 281-880-0700 to schedule an appointment with Dr. Fayaz.

Request an Appointment Today
in Our Office or Virtually